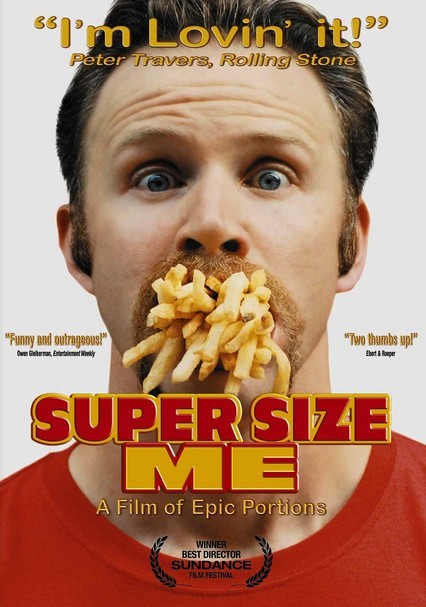 2004 PG-13 1h 38m DVD
Director Morgan Spurlock takes a hilarious and often terrifying look at the effects of fast food on the human body, using himself as the proverbial guinea pig. For one month, Spurlock eats nothing but McDonald's fare.

Parents need to know that Super Size Me is a 2004 documentary in which filmmaker Morgan Spurlock eats nothing but McDonald's fast food for one month in an attempt to make a broader point on how fast food has affected the health and well-being of people in the United States. There are some sexual references; Spurlock's sex life with his girlfriend is not what it once was since living on nothing but Big Macs and Egg McMuffins. Exposed female breasts are seen on a poster in the background. There are two instances of graphic imagery: Spurlock vomits his lunch out the side of his car window (there's a shot of the vomit splattered on the parking lot), and there are extreme close-ups of a surgery. Profanity includes "s--t" and "f--k." This movie provides an engaging opportunity for families with teens to discuss the effects of fast food on health, how fast food is marketed to kids, and why it's important for kids (and adults) to get exercise on a regular basis.

The girlfriend of the filmmaker laments his decreased sexual desire and prowess. Exposed female breasts are seen on a poster in the background.

Extremely graphic scenes of an operation.

Occasional profanity: "s--t," "f--k you" once, "crap." The word "s--t" is clearly visible on a poster in the background of some scenes.

Though the statistics the movie presents paint a dire picture of obesity and the effects of fast-food marketing campaigns on children, the movie also suggests that people have the power to confront these issues head-on and change their eating habits. Shortly after the film was premiered, McDonald's eliminated their "Super Size" options on their menus.

McDonald's is the central focus, in addition to the food industry as a whole. The effects of McDonald's marketing campaigns targeted to young children are shown and discussed.

This information for parents is provided by Common Sense Media, a non-profit organization dedicated to improving kids' media lives.

Unlimited movies sent to your door, starting at $9.99 a month.